April 1945.  The German forces in northeast Italy and their fascist Italian allies are braced in the "Voralpenstellung" for the coming assault of the 15th Allied Army Group to their southwest, and manning their "Ingrid Line" on their eastern flank in the Udine and Gorizia provinces against Tito's Yugoslavian 4th Army and Croatian partisan brigades coming from the east.  Italian partisan uprisings complicate their rear, and their only option is to hold off the slavic partisan armies to the east and fight a rearguard action against the British as they withdraw through the passes into Austria to.....safety?  And you are there.......... 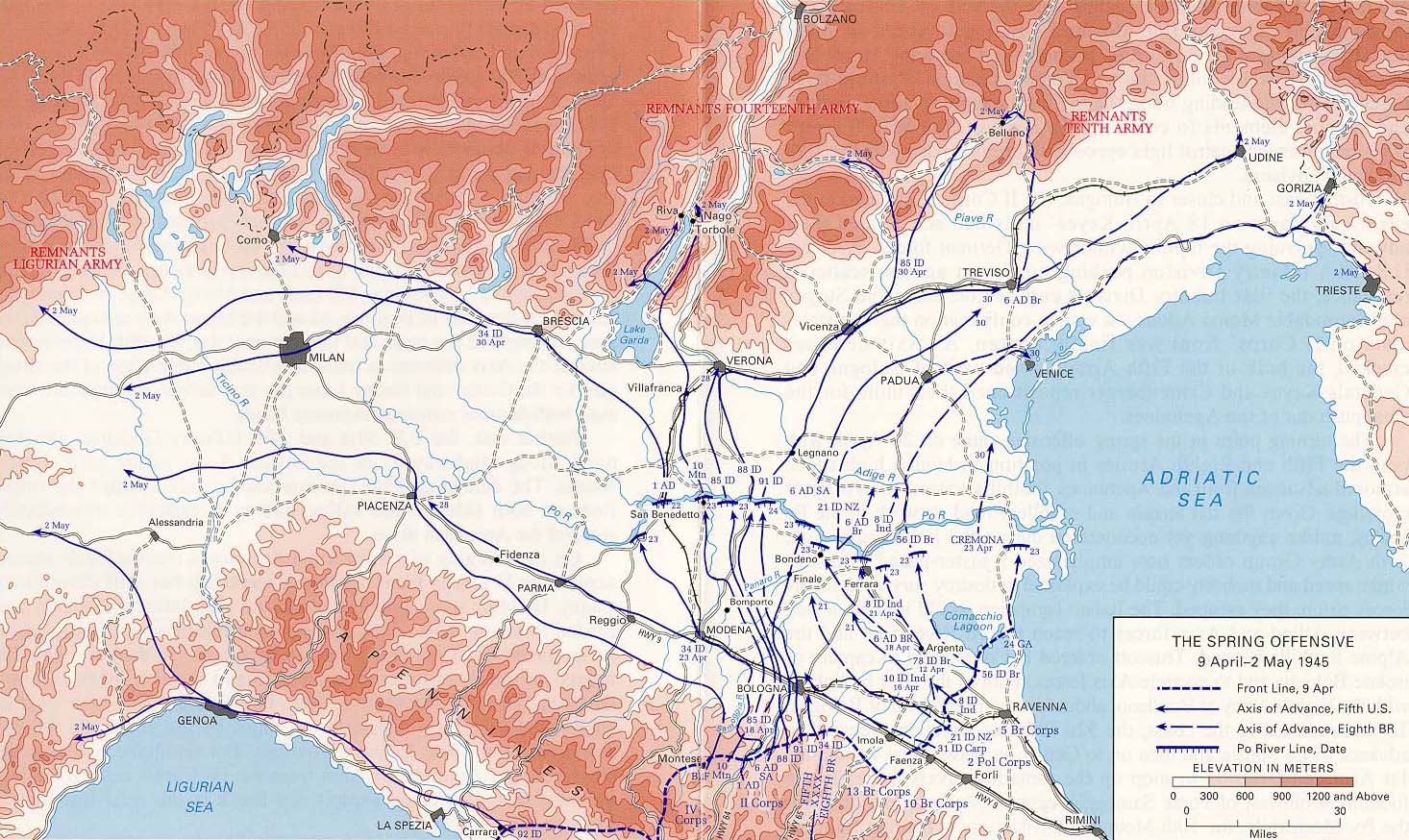 The German forces in northeast Italy were a very diverse group of soldiers, ranging from Heer infantry to jager, panzer and panzergrenadier, to volksgrenadier and Fallschirmjager to SS mountain troops and even Italian Bersaglieri and the 'german' 162nd Turkestan Infantry Division. This allows for a large representation from the reenacting community of Axis units for the event.

The allied forces in northeast Italy were also a very diverse group of soldiers and included both U.S. 5th Army and the British 8th Army.  The U.S. 5th Army included among their ranks the 1st Brazilian Infantry Division and the British 8th Army included forces as diverse as British, Irish, Indian, New Zealand, Italian, Polish, Gurkhas, and even the Jewish Brigade from Palestine.
Italian partisans fought the germans, the allies, and even each other, as did Croat partisans against Communist partisans in eastern Italy as well as western Yugoslavia.  Tito's partisans had grown from from bands in 1941 to a full-fledged army by late 1944, with armored formations, an air force, and even a small navy.  Columns of Stuart tanks supplied by the U.S. can be seen in 1944 heading for the front, and the Yugoslavs even went to the extent of up-gunning them as assault guns using captured German Pak 40 antitank guns.  One of the last races of the war was the race between the British 8th Army to beat the Yugoslavian 4th Partisan Army to capture the city of Trieste, and indeed, the last battle of WW2 in Europe was fought between german forces and Yugoslav partisans on 14-15 May 1945, a week after the surrender of Germany, at the battle of Poljana.

BRITISH:
​6th Armoured Division, and any ​South African, New Zealand, Indian, Polish, Gurkha or any generic British Army impression.
UNITED STATES:
​85th, 92nd (Colored {Buffalo Soldiers}) (the 442nd Japanese American Infantry Regimental Combat Team was also attached to the 92nd ID), 34th, 88th, and 91st Infantry Divisions.  The 1st Armord Division, 10th Mountain Division, and 1st Brazilian Division, or any generic US Army impression uniformed and equipped by the standards seen in northern Italy in 1945.
ITALIAN ALLIED CO-BELLIGERENT ARMY:
​There are A LOT of them, let us know who you want to portray!

Jagers, Volksgrenadiers, Panzergrenadier, Turkestan Infantry, Fallschirmjager, Panzer, 24th SS Karstjager, Gebirgsjager, Polizei, or any generic HEER impression uniformed and equipped by the standards seen in northern Italy in 1945. (SS units will ONLY portray SS Karstjager or SS Polizei).
ITALIAN SOCIAL REPUBLIC (MUSSOLINI's Fascist Army fighting under the Germans)
​There are A LOT of them, let us know who you want to portray!

Partisans, pick whomever you want to portray and fight with or against.  Yugoslav, Italian, pro-allied, pro-axis, anti-communist, pro-crown, etc. etc.  MORE TO FOLLOW as we unravel the chaos of northeastern Italy in 1945.

Italian - Like their counterparts elsewhere in Europe, Italian partisans seized whatever arms they could find. The first weapons were brought by ex-soldiers fighting German occupiers from the Regio Esercito inventory: Carcano rifles, Beretta M 1934 and M1935 pistols, Bodeo M1889 revolvers, SRCM and OTO hand grenades, Fiat-Revelli Modello 1935, Breda 30 and Breda M37 machine guns. Later, captured K98ks, MG34s, MG42s, the iconic potato-masher grenades, Lugers and Walther P38s were added to partisan kits. Submachine guns (such as the MP 40) were initially scarce, and usually reserved for squad leaders.
Automatic weapons became more common as they were captured in combat and as the Social Republic regime soldiers began defecting, bringing their own guns. Beretta MABs began appearing in larger numbers in October 1943, when they were spirited away en masse from the Beretta factory which was producing them for the Wehrmacht. Additional weapons (chiefly of British origin) were airdropped by the Allies: PIATs, Lee–Enfield rifles, Bren light machine guns and Sten guns.[21] U.S.-made weapons were provided on a smaller scale from the Office of Strategic Services: Thompson submachine guns (both M1928 and M1), M3 submachine guns, United Defense M42s and folding-stock M1 carbines. Other supplies included explosives, clothing, boots, food rations and money (used to buy weapons or to compensate civilians for confiscations).

Yugoslav - The first small arms for the Partisans were acquired from the defeated Royal Yugoslav Army, like the M24 Mauser rifle. Throughout the war the Partisans used any weapons they could find, mostly weapons captured from the Germans, Italians, Army of the NDH, Ustaše and the Chetniks, such as the Karabiner 98k rifle, MP 40 submachine gun, MG 34 machine gun, Carcano rifles and carbines and Beretta submachine guns. The other way that the Partisans acquired weapons was from supplies given to them by the Soviet Union and the United Kingdom, including the PPSh-41 and the Sten MKII submachine guns respectively. Additionally, Partisan workshops created their own weapons modelled on factory-made weapons already in use, including the so-called "Partisan rifle" and the anti-tank "Partisan mortar".