One of our other historic impressions we portray is the 255th Machine Gun Company of the British Army in World War One.  We have two vickers machine guns in the 255th Machine Gun Company and portray soldiers of the company as they were when they participated in the Battle of Cambrai in August 1917, as part of the 47th Division.
In addition to our Vickers Guns, we are collecting and researching the equipment that was used for firing the Vickers guns in the indirect fire role, so that we may practice and demonstrate how the Vickers guns were used to fire machine gun barrages.  The machine gun barrage was an important tactic that is often overlooked in the history of the Vickers gun.
We have a trench site at Van, Texas, that is our primary location for hosting and running World War One events. 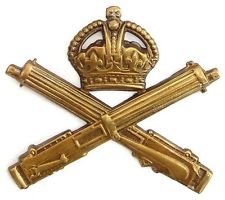 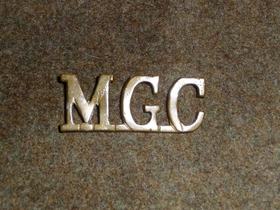 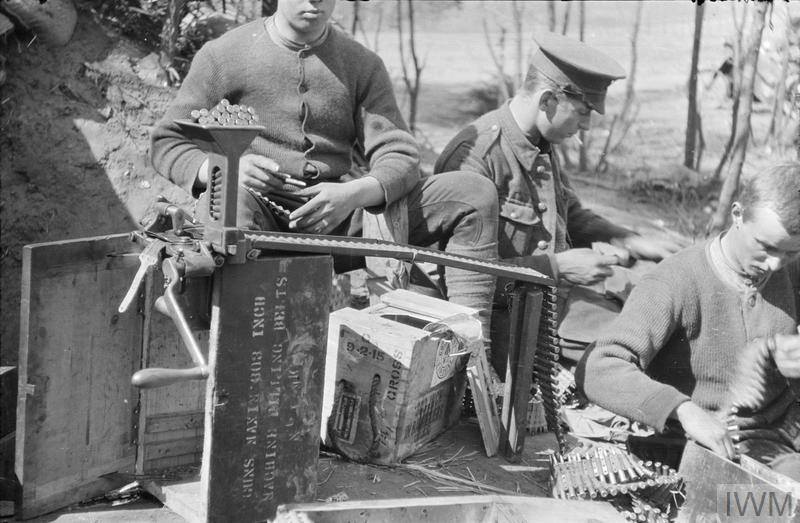 PUTTING TOGETHER YOUR IMPRESSION

There are a few different vendors that sell WW1 British uniforms and equipment.  What we recommend, since this isn't a very inexpensive hobby, is going with the cheapest available that is good quality.  Luckily, the cheapest uniform we recommend is the best quality out there, and the web gear is all made in the same factory no matter whom you buy it from, so spending the least amount of money will get you the best there is.
Now, if you want to do a stictly machine gunner impression, you don't need all the webbing.  You may choose though, to get a standard set of webbing, in case you get the itch to go "over the top" with the infantry.  Below is an example of what you will look like (minus the boots and puttees, not visible in the photos) with our recommended uniform and webbing. 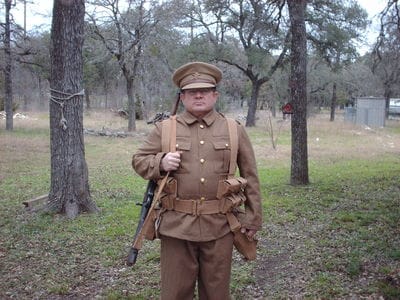 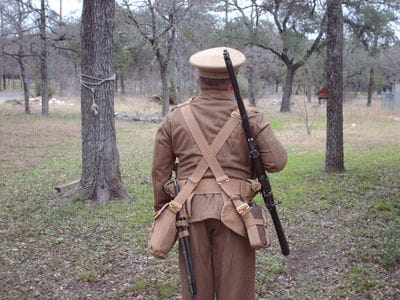 Above left and right are the front and rear views of standard infantry in P08 web gear.  Below are the right and left side views of the same.  Disregard the bayonet lug on the end of the entrenching tool helve. I need to dig out my WW1 helve without the lug.  I stuck this one in there to stretch the webbing out.  If your helve or bayonet scabbard won't fit in the webbing, simply soak the webbing in hot water for a bit, and stretch it and it will then fit.  And yes, I forgot to swap out the web sling with the leather! 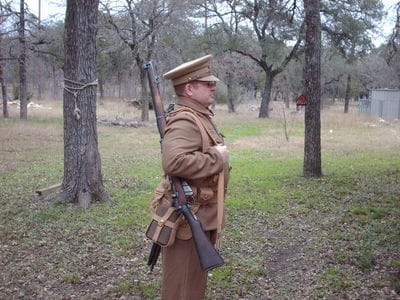 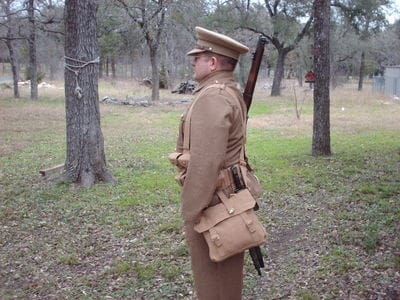 The uniform is from "The History Bunker", and the webbing is from "Military Tour".  "The History Bunker" lists the uniform, which consists of the tunic, trousers, cap and puttees, for 224.99 British Pounds.  I got mine from them on ebay.  They sell the same uniform on ebay for the list price or "Make an Offer".  I offered 200 pounds, and they accepted, saving me 25 pounds.  They tailer the uniform to your measurements, so this is the most comfortable wool uniform I've ever worn, and it was made specifically to fit me.  The P08 web gear set is from Military Tour, and lists at $150 U.S. Dollars.  I received a 10% discount code from them, so got my webbing for $135.00 U.S.  The easiest place to get a No. 1Mk. III Enfield rifle is on Gunbroker.com.  And your cheapest deals on an e-tool head, helve (handle) and canteen are generally going to be on ebay, with a little patience and watching for the best deals.  Ammo boots are available from several vendors, and for our club, since most of us do WW2 British as well, we use our WW2 pattern ammo boots, which are cap toed, but what the hell. If you're doing it right, they're covered in mud and dirt and no-one will know the difference.

LINKS TO BUY YOUR UNIFORM AND KIT 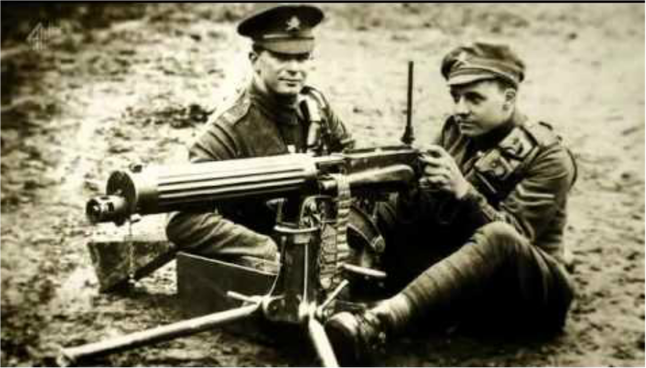